The early 1900’s, most of the original black churches and congregations were located in areas which became exclusively white communities with the establishment of segregation laws.

In the early 1900’s, most of the original churches and congregations were located in areas which became exclusively white communities with the establishment of segregation laws. Trinity United Methodist Church is the oldest established black congregation in Fort Myers and dates back to May 1889. Their first sanctuary was located at the corner of and Lee Street. In 1908, the church was relocated to the corner of Lime Street and Cranford Avenue. The current sanctuary, located at 2979 Lincoln Boulevard, was constructed in 1963 and is not considered historic. 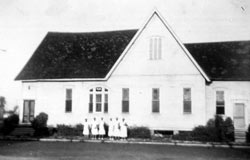 St. John First Missionary Baptist church was organized as a congregation in 1898. The two-story red brick church located on Brown Street between Price and Douglas Streets, originally served as the Chapel at Buckingham Air Field during World War II. After Buckingham Air Field closed, the building was acquired by the St. John Congregation. The building was moved to its present location in 1951.

Friendship Baptist Church was organized as a congregation in 1912. In 1930, the church congregation was purchased a plot of land located at the corner of Palm Avenue and Kerney Street. On the second Sunday in November 1950, after many years of struggle and sacrifice, the first church service was conducted in the new building. Mt. Olive African Methodist Episcopal Church is one of the oldest churches in the Dunbar community with the formation of the congregation dating back as early as 1895. For a number of years church services were held at several different locations, including the Lee County Courthouse, which was where the congregation was originally organized. The church was built as its current location at Orange Street and Palm Avenue ca. 1929.